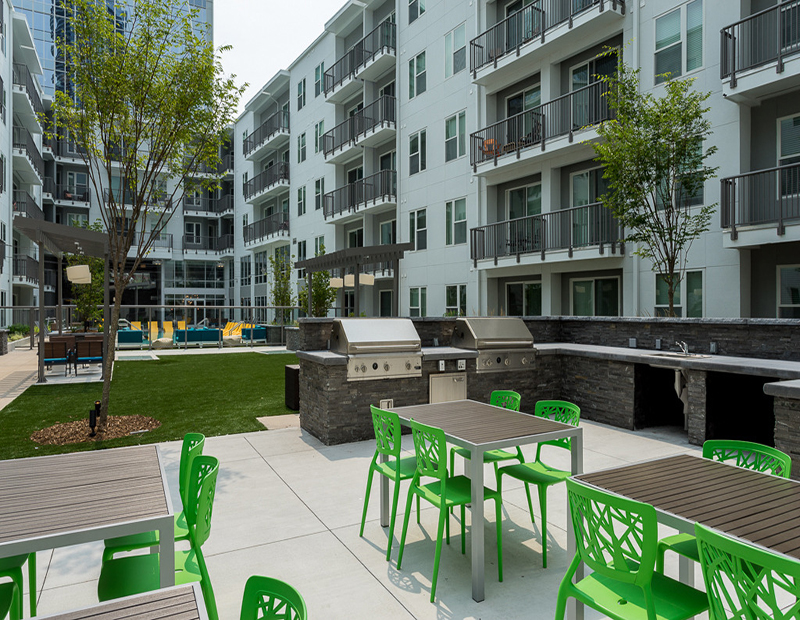 Built in 2014, the 355-unit Berkshire Terminus, located at 20 Terminus Place, will be renamed Bell Terminus. The mid-rise community is found in the Buckhead neighborhood of Atlanta. Residents are within walking distance of the region’s Terminus mixed-use development. Bell Terminus also provides close access to major Atlanta metro employment, nightlife and shopping destinations.

The Terminus project was conceived as a living-work-play district and an urban center, according to architect Duda | Paine. It comprises over 1.5 million square feet of office space and over 100,000 square feet of retail, occupying an entire block in Buckhead, with a pedestrianized plaza offering shops and restaurants, as well as parks and gardens for people and events.

Built in 2015, the 256-unit Berkshire Howell Mill, located at 1950 Howell Mill Road NW, will be renamed Bell Collier Village. The property is in the city’s Westside Corridor, close to Georgia Tech, the Microsoft and Google Regional Business Centers under construction, and existing Facebook and Amazon sites at Atlantic Station.

“The acquisition reflects Bell’s strategic focus on Atlanta as a target market for further investments. Atlanta MSA has strong apartment fundamentals, both short and long term, based on a diverse economic base, favorable demographics and strong immigration, ”said Nickolay Bochilo, executive vice president of investments at Bell Partners. Multi-dwelling news. “The transaction provides an opportunity to invest in the growing areas of Buckhead and Midtown where the cost of new construction and home purchase is higher and where the lifestyle is appealing to the growing number of professionals. .

The properties, acquired on behalf of Core Fund I investors from Bell Partners, represent the 12th and 13th communities that Bell Partners manages in the Atlanta area, as well as the company’s second and third acquisitions in the metro area. Atlanta in 2021, after the September acquisition. by Bell Alpharetta.

The acquisitions come at an exciting time for the growth of the city of Atlanta. According to the 2020 census, Atlanta’s population has grown 18.7% since 2010.

In September, Bell Partners sold 23 multi-family properties that are part of several investment management vehicles for more than $ 1.8 billion.