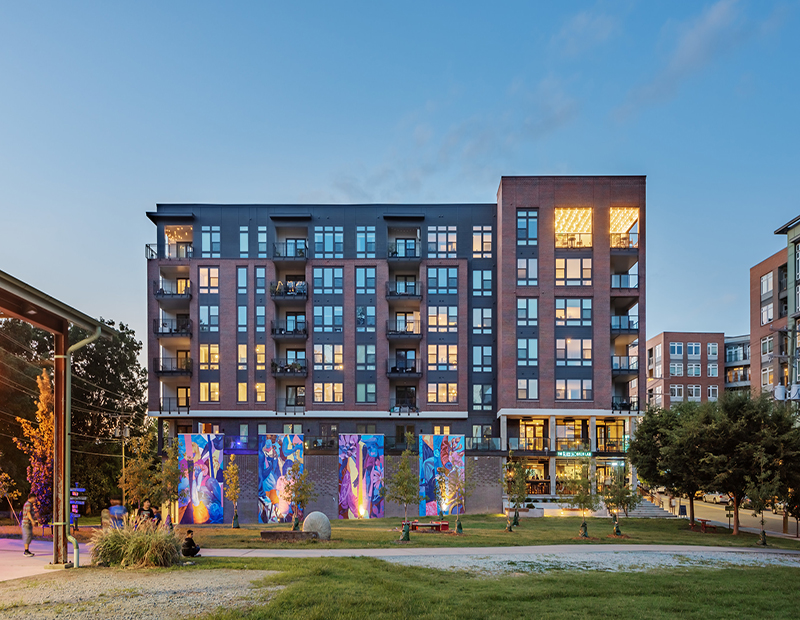 Blue Heron Asset Management achieved another record sale in the Raleigh-Durham subway. The company sold Foster on the Park, a 164-unit community in downtown Durham, North Carolina, to Stockbridge for $78.3 million, or a sale price of $477,000 per unit.

NordMarq‘s Allan Lynch, Jeff Glenn and Andrea Howard represented the seller, who also grew the community. Seeking to meet demand for urban residential housing in the Durham submarket, Blue Heron secured construction financing and began building Foster on the Park in May 2018. According to Yardi Matrix data, First National Bank of Pennsylvania provided the construction loan of over $23.8 million for the mixed-use project. Blue Heron delivered the first community units and rental office in July 2020.

Since then, the community has achieved 92.7% occupancy for its one-, two-, and three-bedroom units that range from 576 to 1,620 square feet, according to Yardi Matrix data. Units were built with Nest thermostats, Google Fiber compatibility, and washers and dryers, while some units have private patios or balconies, double-sink vanities, and benches of entry. Facilities at Foster on the Park include a fitness center, saltwater pool and lounge, sundeck, library, yoga room, package room, pet spa, fire pit , a charging station for electric cars and a bicycle storage room.

Blue Heron also built the community with 2,141 square feet of ground floor retail, which is currently leased to a local brewery. Foster on the Park has been classified as a very walkable community, being located within walking distance of several restaurants, retail businesses and entertainment venues. David Nix, managing director of Stockbridge, said in prepared remarks that the company is attracted to well-positioned assets that respond to explosive growth in a region, particularly in markets like Durham.

Blue Heron’s sale of Foster on the Park comes several months after the sale of Indigo Apartments, a 489-unit community also in metro Raleigh-Durham, for a record $121.9 million. The company first acquired the community in December 2018 and has completed several renovations to the interiors of the units and amenity spaces. Blue Heron has yet another metro investment in the works, the 229-unit 810 Ninth community that stabilized in late 2017.

Since its inception in 2011, the company has expanded its portfolio into high-growth metropolitan areas in the Southeastern United States. Some of Blue Heron’s past investments include communities in Orlando, Florida; Nashville, TN; and Frederick, Md.