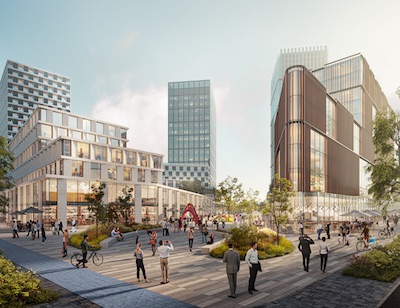 Shoppers World in the City of Brampton, GTA, will undergo major redevelopment and intensification, led by RioCan REIT, over the next 20 years or so. (Courtesy of RioCan REIT)

With plans in place to intensify parts of the city and large plots of land available in its eastern and western parts, the city of Brampton in the Toronto area has become a hotbed for development.

This is especially true in the multi-residential sector, with the city showing increased openness to growth and attracting a lot of builder attention.

Brampton 2040 Vision is a document created in 2018 to shape the future of the rapidly growing city of nearly 700,000 people, located in the northwest part of the Greater Toronto Area. It deals with the environment, employment, urban centers, neighborhoods, transport, social issues, health, arts and culture.

Nearby Mississauga, the other major city in Peel Region, has developed or is in the process of developing much of its available green space. This is not the case in Brampton.

“I consider Brampton to be what Mississauga was 20 years ago. The opportunity here now to provide intensification along major avenues and transit routes is excellent. Planning staff now agree with this. Before, there was more resistance,” National Homes president and managing partner Jason Pantalone, whose company has developed more than 2,000 acres and more than 1,000 homes in Brampton, told RENX.

He credited the current city council with a renewed emphasis on transit-oriented development.

“Now you can see, from top to bottom, there is a direction to promote smart development that relies on good planning. We see it now, whereas five years ago it was a different municipality and a different management. It was very frustrating to do business in this municipality.

This has led to a series of major developments and redevelopments comprising millions of square feet of space and thousands of housing units, as well as new businesses, retail, offices and infrastructure.

“I’m encouraged that they’re trying to think boldly and be comprehensive with their vision,” Wang told RENX. “They put a lot of thought into all the supporting infrastructure needed to support the development. This includes public transit.

City of Brampton officials are also starting to work more closely with the development community, according to Wang.

“Brampton realizes that it’s important to think about public and community demands, which are always essential, but also market demands. When you are able to bring together market, technical and community requirements, it sets up the right conversations and processes for new developments to come online. »

These measures opened up opportunities that the developers were eager to take advantage of.

Shoppers World is comprised of a one-story enclosed mall and freestanding stores covering approximately 690,000 square feet on a 53-acre site that will be redeveloped in phases over 20 years.

It could include four million square feet of mixed-use density with a focus on sustainability, ultimately.

“The City of Brampton is very excited for us to do more with this site,” John Ballantyne, RioCan’s chief operating officer, told RENX. “Shoppers World is an older asset that is still a viable part of the community. But, where we can add accommodation around it, we think it’s essential.

The property could include up to 4,500 residential rental and condominium units and over 800,000 square feet dedicated to commercial uses, including retail and offices.

It will also include parks, open spaces and new pedestrian and cycle streets to transform it from a car-dominated environment with acres of surface parking. It could also integrate a school and a community center.

“Through the public realm and new streets and linear connections, this will create deeper connections into the site and each of the mixed-use neighborhoods that will be introduced to the site over time,” Wang said.

“This mix of uses will include a main retail street which would have a high pedestrian concentration and new retail and small scale commercial opportunities as well as new opportunities for larger commercial and retail uses. format. Then there are a number of types of residential developments including townhouses, mid-rises and taller buildings.

The site is bounded by Steeles Avenue West to the south, Main Street South to the east, Charolais Boulevard to the north, and Kaneff Park to the west.

Metrolinx’s 18-kilometre, 19-stop Hazel McCallion Line, a light rail transit (LRT) line that begins in Port Credit near Lake Ontario to the south, will travel north along Hurontario Street to terminate at Shoppers World when it is finished.

It is planned to integrate an existing bus terminal and future LRT stop to create a transit plaza surrounded by commercial and retail uses.

The redevelopment project received unanimous approval for rezoning and its master plan in November 2020. The planning and design process continues to move forward.

SvN is working with RioCan, lead architect BDP Quadrangle and a team of multidisciplinary consultants to complete site plan approvals for Phase 1 at the southwest corner of the site, which will feature two residential towers with extensive landscaping . This will not affect existing retail.

Additional site plan approvals will be sought on a district-by-district basis as the project progresses.

“There are no short-term plans to scale them up or redevelop them,” Ballantyne said. “However, they are part of our pipeline that we can reach over the next 30 or 40 years and do just that. In the meantime, they are wonderful assets and revenue-generating trophies for RioCan.

Duo Condos is a multi-phase development in Brampton, by National Homes and Brixen Developments. (Courtesy of National Hearths)

Duo Condos is a multi-phased residential community with ground-level retail space from partners National Homes and Brixen Developments at 245 Steeles Ave. W. A campus of Sheridan College is to the west and the future LRT line will be to the east.

The first phase includes 349 units, with the initial release of 300 condos sold in just a week and a half. The second version is coming this spring and a third version which will include penthouses and townhouses will follow later.

“Being able to offer homes from $425,000 all the way up to $850,000 or $900,000 provides a more affordable product that can’t be found anywhere in the GTA,” said Pantalone. “It was important to us, given the context and our history in Brampton, to be able to offer a product like this that can serve the market and that we can be proud of.

National Homes and Brixen closed the site in May 2021 for an undisclosed price after conditionally acquiring it from Sundial Homes in October 2020.

Pantalone said land values ​​and unit revenues have risen significantly since then, although he cautioned that rising construction costs were impacting the overall feasibility of some projects.

Several other high and mid-rise multi-residential projects are in various stages of development in Brampton.

– i-Squared Developments’ Stella at Southside Condos is a 21-story, 290-unit full development near Steeles Avenue West and Hurontario Street slated for completion in 2023. The 40-story, 450-unit Stella 2 is in pre – construction. Sales have not yet started, but are expected to be completed in 2027.

– Boardwalk REIT and Redwood Properties are developing 45 Railroad, a purpose-built, 365-unit, twin-tower rental apartment on the site of the former Dominion Skate Building at 45 Railroad St. in downtown Brampton. The first tower should be occupied in September and the whole development should be stabilized in 2024.

– Daniels Corporation’s four-story OMG 2 condos, the second phase of the community planned by Master Olivia Marie Gardens at Mississauga Road and Olivia Marie Road, is under construction and expected to be completed next year.

– Daniels MPV is a master planned condo and townhouse community located just east of Creditview Road on Bovaird Drive adjacent to the Mount Pleasant GO Transit station. It is a development of Daniels-Choice Properties which is currently under construction.

– Bristol Place of Solmar Development Corp. is a two-tower, 48-story, 1,148-unit condo that is in the pre-construction phase at 199 Main St. N. Sales are expected to begin soon.