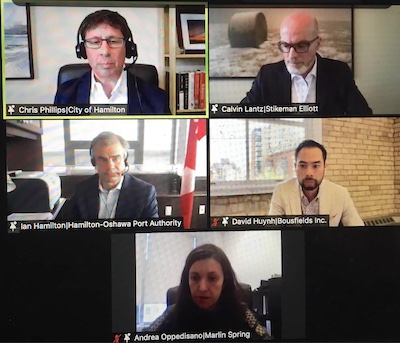 Panelists at a ULI Toronto webinar discussing the compatibility of industrial and residential uses, and the issues that can be created when in close proximity. (Screenshot via Steve McLean, RENX)

The housing boom in the Greater Toronto and Hamilton Area (GTHA) is increasingly spreading to historic industrial and employment areas, and a recent online panel from Toronto’s Urban Land Institute examined some of the issues and strategies that arose from the situation.

Stikeman Elliott Partner Calvin Lantz provided an overview to kick off the event and noted that residential and industrial land uses are not always compatible. He said it may depend on: the type of industry involved; industry emissions, including noise, vibration, dust and odours; and the built form and intensity of the proposed residential land use.

“Is it a single-family home being introduced or is it a tall tower next to an industrial operation with views and exposure to emissions?” Lantz asked.

The Greater Toronto and Hamilton Area has a limited supply of land due to Lake Ontario and the Greenbelt which limits expansion into agricultural land and natural areas.

Within these boundaries are historic land designations and existing infrastructure with roads and transit lines that dictate site use. A growing population has increased the potential for conflict.

Lantz stressed the importance of compatibility being considered as part of comprehensive municipal planning processes and with every development approval sought.

Chris Phillips, Director of the City of Hamilton’s Municipal Lands Office, who moderated the discussion, then introduced three other panelists who joined Lantz.

Hamilton-Oshawa Port Authority President and CEO Ian Hamilton said he oversees 650 acres that contain 135 tenants. More than $4 billion worth of goods pass through the port each year, supporting 28,000 jobs in Ontario.

Hamilton said there are 17 port authorities in Canada, and all face compatibility issues balancing their mandates with the residential and recreational aspirations of their home towns.

“In most cases, cities were built because of access to water, and then in many cases the city overhangs and surrounds ports, which sometimes makes compatibility and collaboration difficult” , Hamilton said.

“But I certainly believe it is possible, and it requires a good deal of transparency, open communication and recognition of the specific needs of both parties.”

The housing crisis could change policies

While David Huynh, partner at Bousfields Inc., said government policies protecting industrial land and other employment land are probably the strongest they have ever been, things could change somewhat due to the crisis. housing growth in the GTHA.

“Industries need to come together to defend their own turf,” Lantz said. “It’s not enough for them to stand up and say, ‘We were here first.’ It works in a sandbox, but it doesn’t work here when it comes to politics and limited appeal rights.

Routing and transport of trucks

Phillips raised the issue of routing trucks through neighborhoods where there are both industrial and residential uses. Products need to be transported from place to place, but security issues must also be considered.

“It’s one thing to protect the land and transition to these big warehouses along our highways,” Huynh said. “But as logistics networks seep into our communities, companies are looking at smaller satellite facilities with smaller trucks.

“Negative thinking is worrying about the noise and pollution that small facilities will add to our communities, but an optimist might see this as an opportunity to plan it well and mitigate it and maybe there is- there a way to coexist or harmonize with these uses.

Oppedisano stressed the importance of early and frequent communication between a residential developer, an industrial land owner and other neighbors so that everyone is aware of what is happening now and what is planned in the future. .