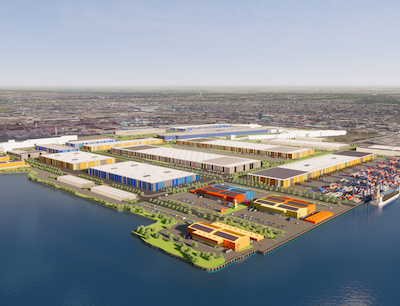 An artist’s conception of the potential future development on the former Stelco lands in Hamilton, which have been acquired by Slate Asset Management. (Courtesy of Slate)

The passing of Labor Day for many means the end of summer and it’s time to get back to the office full-time – wherever the “office” is right now.

For those who have been absent and want a quick and easy “catch up” on some of the most important news of the summer, we’ve compiled our annual list of RENX’s most important articles from the past few months.

This summer didn’t produce the number of huge deals we’ve seen in recent years, but there were several major development announcements, deals, and other big headlines.

They are included here, along with a selection of our most read columns submitted by RENX contributors, all experts in their sectors of the commercial real estate industry.

Slate Asset Management has completed its $518 million acquisition of 800 acres of industrial development land and buildings from Stelco Inc., where it plans to develop up to 12 million square feet of new industrial properties.

One of Canada’s most iconic communities, Cherryhill Village in London, Ontario, has been sold in a record $571 million deal. Minto, KingSett Capital and a private partner sold the community, which includes 12 concrete apartment towers with 2,114 apartments, a shopping center and offices, to Park Property Management of Toronto.

Grosvenor has acquired the 14-acre former Oakridge Transit Center (OTC) in Vancouver, where it will become lead developer for a major mixed-use project designed to deliver 17 buildings and 1,630 new residential units. MOMC (Modern Green Canada), which acquired the site in 2016 and guided it through the approval process, remains a funding partner.

Panattoni hasn’t built any new assets in the Calgary market for a few years, but that’s about to change. The company has purchased 122 acres in the southeast part of the city, in partnership with Manulife Investment Management, with the potential to build up to 2.3 million square feet of industrial real estate.

There has been a sharp increase in salaries for employees of all real estate categories in the Greater Toronto Area as companies struggle to find top talent: “Overall this year, we’ve seen drastic changes,” said Dan McLeod, director of real estate recruitment at Hays in Toronto.

DSquare signs the largest industrial lease of 2022 in Quebec

Transport DSquare signed what should be the largest industrial lease of the year in Quebec, obtaining the entirety of an 822,000 square foot building located at 4505 Hickmore Street in the Montreal suburb of Saint-Laurent.

Metro Vancouver’s industrial market continues to set records as the most expensive in Canada, with six consecutive quarters of the most limited supply in the country. The ultra-tight market meant a vacancy rate of 0.5% and a record industrial rental rate of $18.09 per square foot in the first quarter of 2022, according to Avison Young Spring 2022 Industry Snapshot Report.

Reliance Properties has signed retailer Lululemon as the anchor tenant of its new Burrard Place office tower in what the company calls “the largest commercial lease deal in downtown Vancouver since the start of the global pandemic.” Lululemon has committed to nine of the tower’s 10 floors, or approximately 120,000 square feet of space.

Equiton acquires an apartment building in Brampton for $63 million

And finally, a quintessentially Canadian story. Adeola Olademeji came to Canada in 2019 from Nigeria with a background in real estate and investing, and three years later his Ascendi Capital Corp. acquired its first major property, a 44-unit building in Edmonton.

Some of our most read summer columns:

In recent months, we have paid more attention to fluctuations in interest rates and bond yields than at any time in recent history. We’ve seen the stock market slide mostly into the red as interest rates have risen faster than we’ve seen in decades. The impact on landlords and building owners has been significant. An invited submission by Mark Goodman and Cynthia Jagger.

We know that hasn’t happened, but apartment building expert Derek Lobo has made the case for a 6.2% rent increase for 2023. The annual guideline is well below the pace of inflation and Lobo says landlords and property managers shouldn’t expect relief to come. . .

Predicting Market Cycles: How to Be Less Wrong, Chapter 2

Predicting market cycles is nearly impossible. However, the rhymes and story cycles follow typical patterns. Real Estate By The Numbers columnist Volodya Gusek hasn’t personally gone through many of these cycles, but he looks to history for potential answers. . .

Continuing the theme of economic uncertainty, The Apartments Broker columnist Michael Kurkdjian noted that central banks had made the unfortunate decision to fight inflation by penalizing debtors and so there had been a massive spurt of rate hikes since last year. This impacts cash flow and the financing that can be obtained. So how do you combat these effects?