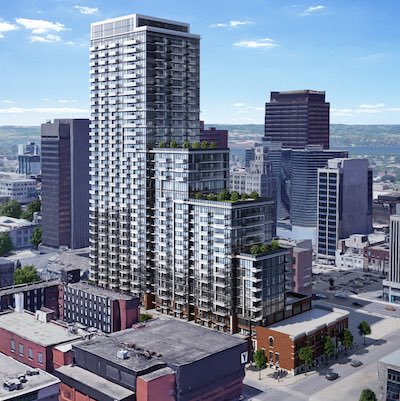 The land began for the latest project in downtown Hamilton, a mixed-use development at 75 James Street S. that will be over 30 stories tall and include over 500 residential units.

The International Union of Workers of North America‘s LiUNA Pension Fund for Central and Eastern Canada (LPFCEC) owns a 100 percent stake in the development. Fengate asset management is the investment manager, developer and asset manager, while The Hi-Rise group is responsible for development and SG Manufacturers is the constructor.

Hamilton’s downtown secondary plan states that buildings should not exceed the height of the Niagara Escarpment, which is approximately 30 stories tall, but the partners have requested and obtained permission from the city to exceed the height limit. with the James Street building.

“Working in conjunction with city staff and local stakeholders, the height of the building was determined taking into account relevant planning policies, previous projects and the response to local housing needs,” said Jaime McKenna, managing director of Fengate and head of the real estate group, said in an email exchange with RENX.

A request filed with the city provided for a tower of 34 floors maximum.

The James Street site was once a bank and was acquired for an undisclosed price in 2018. It was assembled in 2020 with another site at 44 Hughson Street S. – which currently houses LiUNA Local 837 and LiUNA Central and Eastern Canada. regional offices.

Whether the residential component of the development will be a rental apartment or a specially constructed condominium remains to be determined. It will include offices and commercial premises as well as a heritage component.

â€œDue diligence is underway to determine the best model to meet the residential needs of downtown Hamilton,â€ McKenna wrote.

The development will help meet the dramatically increased residential needs in Hamilton from people of all ages and professions, including students, millennials priced out of the Toronto market and retirees.

Residential units will vary in size from studios to three bedrooms. The building’s amenities will include fitness facilities, party rooms, relaxation lounges, a private rooftop green space and underground parking.

â€œLiUNA is incredibly proud to meet the increasingly critical residential needs in Hamilton,â€ said Joseph Mancinelli, President of LPFCEC, Vice President and Regional Director of LiUNA International for Central and Eastern Canada, in an interview. by e-mail with RENX.

â€œMyself, a Hamiltonian, I have a personal passion for the future of our city, meeting current infrastructure needs that will continue to foster economic development, employment opportunities and growth. “

â€œOur LiUNA Central and Eastern region headquarters as well as LiUNA Local 837 at 44 Hughson will be seamlessly integrated into the development and expanded with new office space, retaining the artistic and historic faÃ§ade of the front of the building. building, honoring the foundation and history of those who came before us, â€said Mancinelli.

“In addition, a number of living / working units will be provided, meeting the needs of local small businesses.”

Completion in 2025 is targeted for development.

LiUNA has half a million members in North America, including over 140,000 in Canada, who work primarily in construction.

The LPFCEC was established in 1972 and is one of the fastest growing multi-employer pension funds in Canada. Its diversified investment portfolio has more than $ 10 billion in assets.

Fengate Asset Management is an alternative investment manager focused on infrastructure, private equity and real estate strategies. It has a total asset value of over $ 20 billion and offices in Toronto, Oakville and Houston.

Fengate Real Estate is involved in over 75 properties and investments. The completed value of its portfolio is over $ 9 billion and it has over $ 4 billion in developing value.

The Hi-Rise Group is a fully integrated development and construction company that was founded in 1979. Initially it operated as a merchant builder selling most of the projects it developed and built, but now owns a number of properties across Ontario.

SG Constructors was founded by Matt Stainton and his management team has accumulated over a century of experience working on construction projects.

The two towers Residence of King William in Hamilton and the revitalization of Yonge Eglinton Center, Yonge Sheppard Center, 66 Wellington Street West, 111 Richmond Street West and 180 Wellington in Toronto are part of his projects.

BricksFolios shows real estate agents and brokers how to elevate, differentiate and change the game