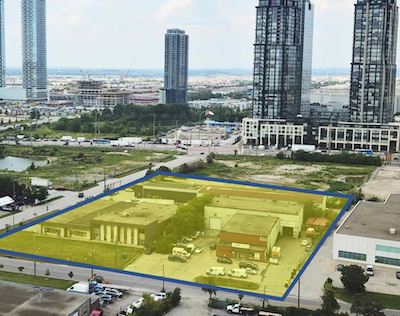 This set of three industrial properties, just down the street from the Vaughan Metropolitan Center, has been sold to Liberty Development Corp. (Courtesy of Vanguard Realty)

Liberty Development Corporation has purchased a set of three properties from three private owners in the growing city of Vaughan in the Greater Toronto Area for $48 million.

Vanguard Realty Brokerage Corp. Managing Director Paul Miceli brokered the deal for 171 Maplecrete Rd., 160 Doughton Rd., and 140 Doughton Rd., which are located south of Highway 7 and east from Jane Street. He said Liberty already owns adjacent land that is already zoned for high-rise residential buildings and is looking to add to it.

“I approached them (the sellers) because I know people from Liberty,” Miceli told RENX. “They already owned the properties before and the plan in this area is changing from industrial to residential.

“I had worked with a few sellers on other offerings and approached them to see if they would sell. Then I packaged the three properties in assembly form and sold them to Liberty, where I dealt with Marco Filice and President Fred Darvish.

Miceli said Liberty would not comment on the acquisition, which he said took about three years to materialize from its initial questions to closing.

Each of the three properties in the complex currently contains an occupied industrial building. The tenants will remain in place to provide revenue until the zoning and approval processes for the proposed development progress.

The area is part of Vaughan’s downtown intensification plan and the Vaughan Metropolitan Center subway station is only a 10-minute walk away, which will appeal to potential future residents.

Miceli doesn’t know many details about Liberty’s plans for its Vaughan site, but said it will include at least three high-rise residential towers. He believes the development will beautify the area and create jobs and opportunities.

Liberty’s expertise and other projects

Liberty, based in Markham, is a full-service real estate development company involved in commercial, office and residential properties in the Greater Toronto Area. She has expertise in land assembly, development, design, construction, sales, leasing and property management.

Liberty’s current condominium projects, all in the pre-construction phase, are:

– Canopy Towers, with a six-story podium that extends around a 34-story tower at 5081 Hurontario St. in Mississauga.

– Promenade Park Towers Building B, a 30-story tower at 1 Promenade Circle in Vaughan.

Vaughan is located just north of Toronto and its high-rise condo market shows no signs of slowing down, according to Miceli.

“Real estate values ​​in Vaughan are not far from downtown Toronto, especially those like in this general area where you are close to the subway and can walk there.

“Anywhere you can walk to the subway is now selling for $950 a square foot and we think it will soon be over $1,000 a square foot.”

The Vaughan Metropolitan Center was planned to be the city’s downtown core with residential, retail, office, restaurant, green space, recreation, and transit components.

It has seen an explosion of development in recent years and more are still on the way.

RioCan REIT also has major projects nearby with the redevelopment of the 61.7-acre Colossus Center shopping center site.

“Vaughan’s skyline is going to look very, very different over the next 10 to 15 years,” Miceli said. “Developers today seem to be a lot smarter because they don’t release all the buildings at once.

“One guy goes to market and sells, then the next one comes to market a few months later, which keeps prices healthy because your competition isn’t so direct.

“It’s not a good thing for the consumer, but it’s a very good thing to keep prices high for developers.”

Nearly half of Americans are ‘financially stressed’

Why Tax Refund Loans Are Bad: Fees, Interest, and Risk