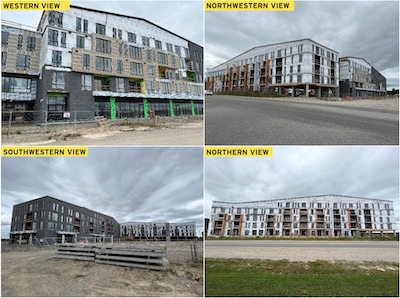 Images of Phase 1 at Applewood Marketplace in London, Ontario, which is in receivership and sold by court-appointed receiver EY. (Courtesy of EY)

Two adjacent development sites in London, Ontario, where Phase 1 of the 584-unit Applewood residential and commercial market is nearing completion, have been put up for sale by a court-appointed receiver.

EY is managing the sale, having been appointed receiver over all assets, businesses and properties of Applewood Marketplace Inc.

Construction of the first phase of the North London development was around 75% complete, but had suffered a series of delays which increased its costs and eventually put the project into receivership.

However, work on the site had stopped on June 1, according to documents filed in the proceedings.

The financier requested repayment of the debt

MarshallZehr Group Inc., the Waterloo, Ontario-based mortgage brokerage and administration company that financed the construction, was seeking repayment of $60.07 million (as of September 15) plus interest charges of nearly $40,000 a day and administrative costs of $20,000 a month, the documents say.

The lender had not received any money from Applewood Marketplace Inc. since April.

There were also 26 claimants with 30 construction liens totaling $8.25 million against the first phase of the development as of September 6.

Active construction had yet to begin on Applewood’s proposed second phase on an adjoining 12.5 acres of vacant former farmland. This site has been maintained to prepare it for development.

It is zoned for medium to high density commercial and residential development to accommodate the construction of approximately 468 residential units and 36,970 square feet of commercial space.

There were eight plaintiffs with 28 construction liens totaling $3.17 million against Applewood’s second phase as of September 6.

The Phase 1 and Phase 2 properties are being sold by EY in two parcels.

The deadline for submitting an asset purchase agreement is 4 p.m. EST on November 8.

Any party wishing to undertake due diligence should sign a non-disclosure agreement and should contact James Rosenthal, Broker and Vice President, Strategy and Transactions, EY Real Estate for Ontario.

Contacted by RENX, Rosenthal said EY was unable to comment on ownership or process.

If there are multiple bidders for both properties and the receiver determines that an auction is necessary, it will be held on November 17.

London-based Extra Realty Ltd. owned the large plot of land in the northeast of London’s Masonville area and sold part of it to Applewood Marketplace Inc. for its two-phase development in 2019.

MarshallZehr began financing the construction of the project in 2020.

Extra Realty still owns over 130 acres of land for future phases of residential, commercial and retail development. These assets are separate from those held in escrow and sold by EY.

Although the Applewood development is probably the largest such receivership proceeding at present, it is possible that similar sales could come to light.