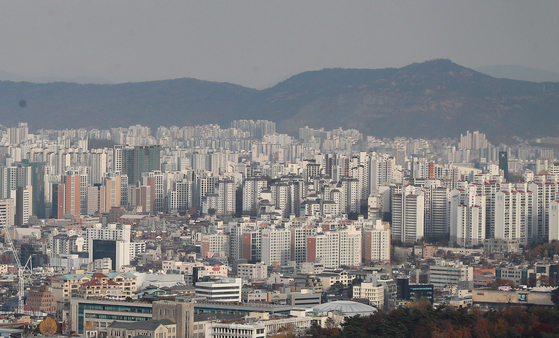 View of the apartment in Seoul on Monday. The ratio of homeowners has declined as the value of housing units increased in 2020. The latest Statistics Korea study indicates that more people are now living in rents. [YONHAP]

The percentage of Korean residences owned by individuals, as opposed to public housing, continues to decline, and the gap between the most expensive and the cheapest residences continues to widen.

According to Statistics Korea on Tuesday, there were 18.5 million residential units in Korea last year, up 2.2% from the previous year. Some 60 percent or 9.4 million were apartments.

Among residences, including houses and apartments, 16 million units were owned by individuals, up 1.8% from the previous year. This represents 86.2% of the total, a ratio that has been declining since Moon Jae-in took office in 2017.

The Moon government tried from the outset to lower house prices. But all of his efforts, from tightening lending to raising taxes on homeowners, have had the opposite effect of what was intended. Prices have risen even faster and finding affordable housing has become more difficult.

Another reason for the housing shortage is the increase in the number of people living alone.

There has been a greater increase in the number of people who no longer own a home than those who buy their first home.

Last year, according to Statistics Korea, there were 570,000 more people who owned a residence but currently do not, an increase of 4.2% year-on-year.

For the first time since the compilation of the data in its current form began in 2015, the total number of families who do not own a single residence has exceeded 9 million.

â€œThe prices of the residences have risen as the estimated value has risen sharply,â€ said Cha Jin-sook, head of the statistics agency.

As part of its efforts to further tax real estate, the government has increased the market value ratio in the assessment of home values. In 2019, the assessed value was 68% of the market value, which rose to 69% in 2020 and 70% this year.

A shortage of apartments in high-demand cities like Seoul has also pushed up prices.

The gap between the most expensive and the cheapest residences has widened further.

The government’s estimated average value for the residences of the top 10% was 1.3 billion won. The cheapest 10 percent averaged 28 million won.

The gap widened mainly due to an increase in the value of the top 10 percent. In 2019, the average value was 1.1 billion won. That’s an 18 percent increase.

While the cheapest 10 percent only increased 3.7 percent.

The Moon government hoped that the owners of several residences would be forced to sell them. But its success has been limited.

The Rise of Antitrust Enforcement in Residential Real Estate: Challenging the…