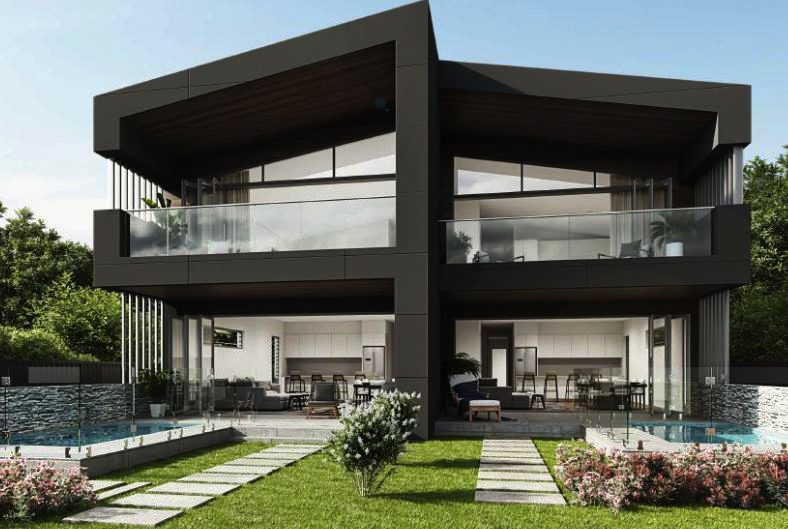 A development application to build a two-story residential building in Booker Bay recently ended its exhibit and residents are not satisfied.

The applicant is seeking to construct the building at 90-92 Booker Bay Rd which is located along the Booker Bay foreshore.

Plans indicate that the building will contain five units and a single level ground floor parking lot for 10 cars which will be concealed behind the front unit.

The units will include four with three bedrooms and one with four bedrooms.

Ground-level rear units have covered outdoor areas and small in-ground pools on the water side.

The existing residential homes on both properties, as well as a garage structure located at the front boundary of 92 Booker Bay Road, will be demolished if plans are approved by Council.

The applicant has stated that the form of the development will be divided into two separate residential elements, separated by one-story garages, and will have an appearance similar to a large residential house at each site.

The developer said site coverage will generally be similar to adjacent properties to the northwest.

The applicant also stated that the proposal does not include the removal of significant trees and that the existing screen planting along the rear boundary adjacent to 88 Booker Bay Rd will be retained and additional landscaping will be provided. .

Over 20 residents made submissions within the three week notice period regarding the size, density and character of the proposed building.

A resident said he was concerned about the volume and scale of the proposal as it â€œwill do nothing to improve the surrounding neighborhood; the volume of the proposed new structure is imposing and does not adequately meet the guidelines â€.

Another neighbor said he had a problem with the “mass and volume” of the development because it was “not proportional to the size of the block of land”.

â€œThere appears to be an attempt to fit as much lucrative housing as possible into the block without any consideration for the small enclave of quaint quality, heritage, character and village of Booker Bay,â€ the submission said.

Another resident said he was concerned that Unit 1 at the front of the proposed building would block its view of the green hills at Daleys Point “which is a visual amenity that is currently enjoyed by … other existing accommodation.”

â€œA development with essentially five properties with 17 bedrooms with a potential to accommodate at least 34 people (not to mention their associated family and friends), with 10 car spaces and a traffic light system which is a major concern in terms of relates to the density of people living in that space and is inappropriate and totally out of character for most of the accommodation in Booker Bay, â€the resident also said.

As the exposure period for this proposal is now closed, it is now up to the Council to decide the outcome of the development request.

To keep track of this app, visit the Central Coast Council website.

For some real estate agents, 2021 has been very, very good