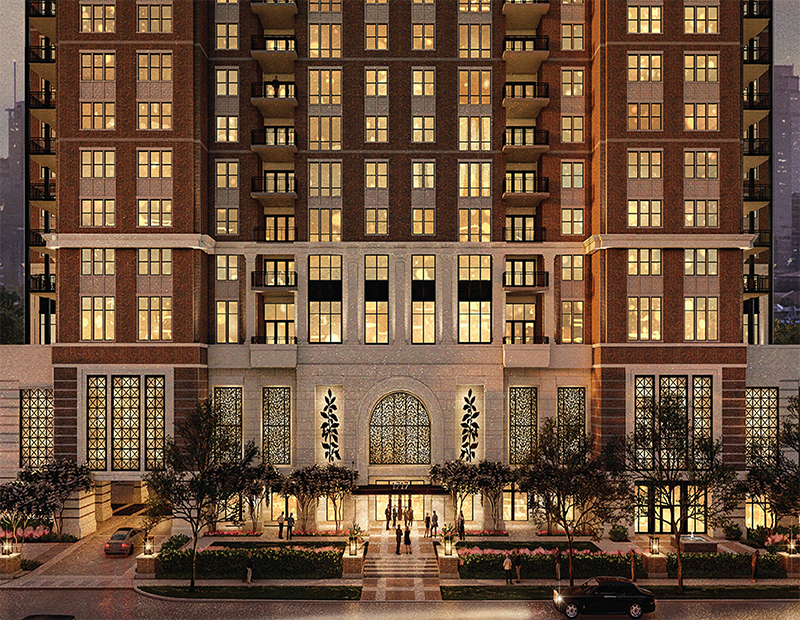 Multi-family and mixed promoter Residential Streetlightsin partnership with Hunt Cos., announced plans to develop its new multi-family community, The Langley, in Houston, Texas. Built at 1717 Bissonnet Street, the Langley will fuse the valet and concierge services of a five-star hotel and the craftsmanship of a private home, offering formal classical architecture resulting in a timeless building design.

The Langley will feature 134 apartments, each featuring expansive two- and three-bedroom layouts averaging nearly 3,000 square feet. StreetLights Residential chose to include larger residences based on the intended target market for the property. The community is designed to attract long-term relocating residents by “smart sizing” large single-family homes to reduce expenses.

“Hunt Cos. has carefully watched the growth of Houston’s high-rise market and the desire for more luxurious urban properties by affluent individuals seeking the convenience of a small but spacious home with the integrated services that The Langley will provide. “, Stephen Meek, Senior Vice President of Development for StreetLights Residential, said Multi-Accommodation News. “This audience wants to be in a residential, not commercial, neighborhood near a world-class medical center, Houston’s arts and museum district, great restaurants, and the amenities they expect.”

At the same time, these residents are driven by a desire to stay in or near the Houston communities where they raised their families. According to a statement prepared by StreetLights Residential, The Langley will be located in an area between Rice University and Houston’s Museum District, and inspired by the centuries-old grace of adjacent Boulevard Oaks and Southampton neighborhoods.

Hunt and StreetLights Residential have previously teamed up on luxury multi-family projects and discussed the Bissonnet site for some time. Given the success of the McKenzie rental community in Dallas, Hunt invited StreetLights to partner with a similar, but even more upscale project in Houston.

“Hunt and StreetLights believe this is the right place for the right development at the right time,” Meek said.

The Langley will be located south of I-69, known in Houston as the Southwest Freeway, in an area of ​​many restaurants and retail establishments and numerous health care facilities, including the Texas Medical Center. Nearby are Fleming Park, Houston Museum of Fine Arts, Houston Museum of Natural Science, Miller Outdoor Theater, Holocaust Museum of Houston, Children’s Museum of Houston, Zoo of Houston and Hermann Park Golf Course. Also to the south of the property are Rice University and Baylor College of Medicine.

The Langley will impose far less impact on traffic than an earlier permitted building in 2013 proposed for the site, which sparked protests and lawsuits from 2007 to 2016. The new development will feature half the unit density from its predecessor, the units reduced from 232 to 134 The garage was also reduced from five to three floors.

“We are increasing our efforts to communicate with neighborhoods with HOA and POA meetings as well as with fence neighbors,” Meek said. “While the construction of this ladder will still be disruptive for some time, we will communicate with our neighbors and share our plans to make the process as tolerable as possible, including working hours, traffic control, parking of off-site employees and security.”

The Langley is expected to be completed in 2025. Several months ago, StreetLights Residential broke ground on a project in Tempe, Arizona.

The CFPB will revitalize its power to examine non-bank companies